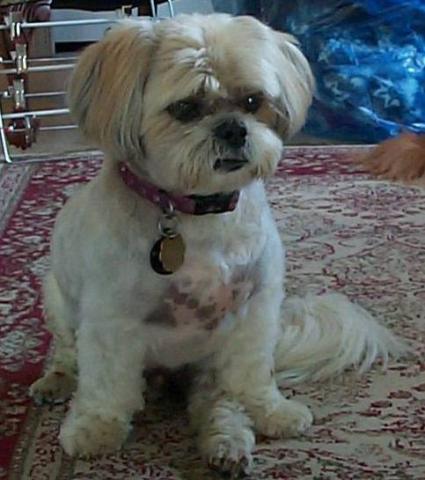 The story of how this website came to be is long, but it is important to tell. This site is in honour of Berkeley, a Shiz Tzu Bishon cross who stole our hearts.

Berkeley was born on February 8, 1999 and was 7 years old when we adopted him on March 11, 2006 from NASAP – Northern Alberta Society for Animal Protection.

On June 27, 2004, while visiting friends at the lake, Berkeley had an accident. We suspect a thunderstorm formed and Berkeley was frightened when he jumped off the deck. His leash caught around his hind legs causing him to slip a disk and lose circulation to both hind legs for several minutes rendering him paralyzed from the waist down. Berkeley had surgery at Calgary Orthopedic Veterinary Clinic where he stayed for a month. With lots of love from his family and dear friends, Berkeley was able to walk again after 6 months of rehabilitation! Two years later, circumstances were such that keeping Berkeley was no longer an option and the family tearfully surrendered him to NASAP.

Berkeley did not know he was handicapped. He walked, ran and tore around outside. The best way to describe his gait was “flip-flopping”. He would swagger and swoosh and was the happiest boy. Berkeley could not climb stairs so he needed to be carried up and down.

Shortly after we adopted Berkeley, he terrified me when he body surfed down the stairs. At first I thought he fell but when he reached the landing, I watched as he carefully placed his front paws on the top step, stretched out and literally skied down the stairs. He was quite proud of himself and for the years that followed, he always skied down the stairs, requiring assistance only to be carried back up.

Berkeley had an entire vocabulary of talks/grunts when he wanted attention or wanted to play. His favorite toy was a brown bear he carried with him everywhere. When he wanted to play, he would pick up his bear and walk over and punt you on the leg.

About a year after adopting Berkeley, I was rear-ended in a car accident which left me with a sciatic nerve injury to my hip and torn ligaments in my lower back. I was in extreme pain and barely able to walk. I endured 13 months of painful physiotherapy, chiropractic and massage therapy. There were days I wanted to give up because it was so exhausting just getting dressed and the pain was unbearable. My inspiration was a little sandy brown boy who wouldn’t let me give up. Together, we walked, we did therapy, we endured treatments and over the years that followed, I healed and the little dog with the crooked spine grew stronger and straighter.

In the fall of 2011, Berkeley started to slow down. He developed arthritis in his back and hips and no longer wanted to go for those long walks we enjoyed so much. We purchased a dog stroller for him and he was able to enjoy our daily walk around the lake but the winter proved to be too much. He began to drag himself around and often would have accidents before he could let us know he needed to go to the bathroom. On July 23, 2012, we made the difficult and painful decision to say goodbye. Berkeley had suffered a ruptured cornea, a condition common in aging Shiz Tzu dogs. We rushed him to Terwillager Veterinary Clinic and were advised that his eye would need to be removed and that his second eye was cratering. At that moment we realized we would have a blind, handicapped boy who was in tremendous pain.

For the next 5 months after Berkeley passed, I went into a deep depression. I was grieving and inconsolable. I focused my attention towards our two Japanese Chins but withdrew from social events and life as I knew it. When the anniversary of Berkeley’s passing began to approach, I knew I needed to refocus my attention and find ways to heal. I would often speak to Berkeley and ask him to help me come to terms with losing him. We began the process of looking to adopt another Shiz Tzu. We made an application through NASAP letting them know we were ready for a new pack member. At the time of our application, there were no dogs matching our criteria.

On July 4, 2013, we received a call from NASAP advising us they had a Shiz Tzu coming into care but there were no foster homes available and would we be interested in bypassing the adoption process and taking this dog in. Without thinking, I said yes. The only thing I knew about this new dog was that he was rescued from an abusive home by a senior couple but the gentleman of the house was ill and they needed to find a home that could take a dog with emotional trauma. When I got off the phone, my husband asked me what color was the dog? I said I didn’t know. All I knew was that he was 4 and had some trauma we needed to work through with him. Two days later, sight unseen, Buttons was brought to our home. Buttons is our gift from heaven. I maintain that Berkeley had a paw in bringing Buttons to our home. On the left is a photo of Berkeley. On the right is Buttons. A few days after Buttons arrived in our home, I was sitting at my desk and he was lying on the floor in the doorway of my office. I looked at him and this wave of peace washed over me. I cannot explain the feeling but at that moment, I knew Berkeley was with me. I knew everything was going to be ok and I knew I was ready to heal. Buttons has a story of his own which we shall share on this page. Your Bridge Kids are always with you in spirit.

In May 2014, I put out a request to the community of Terwillegar Towne (Edmonton) for donations of gently used kennels, collars, leashes, blankets etc. If I received a few collars and some treats, I would have been excited. The response was overwhelming! I collected enough materials to create a 12 page spreadsheet of items and from that I was able to distribute donations to ten local rescues.

No comments to show.